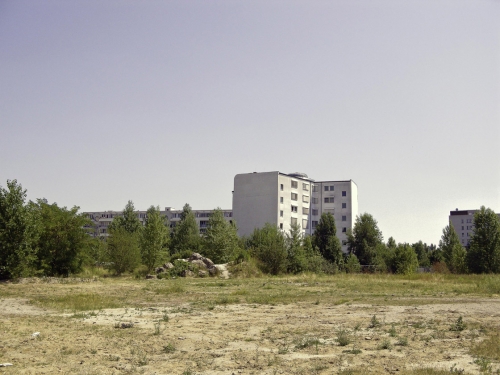 Offices are closed, schools have been reduced to a screen, and museums are perused online. Restaurants are using only the back kitchen and front window if anything at all.

Interior walls have become our entire world. We are learning to use every inch, pushing domestic spaces to capacity, while the mammoth buildings that defined business as usual sit vacant. It is profound to see the infrastructure of our society laid so bare. 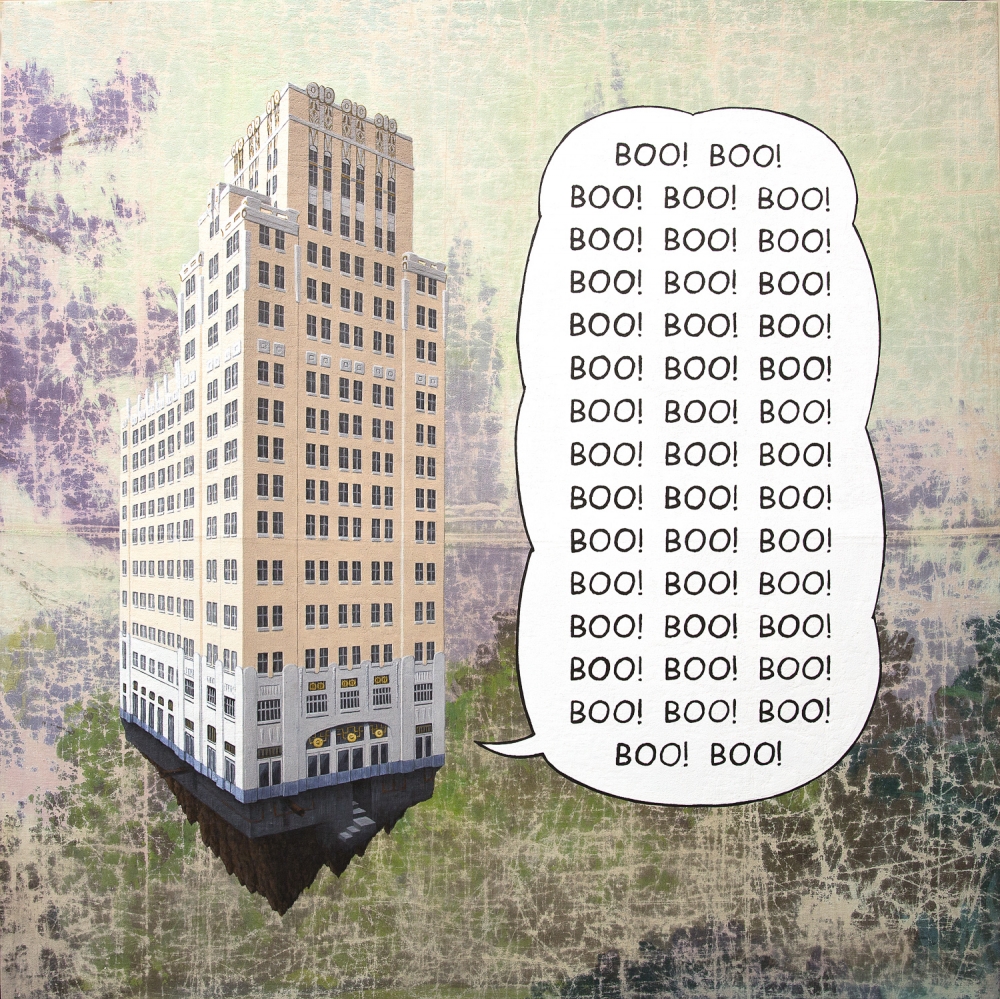 For many the only evidence of the tragedy surrounding us is the strange quiet that has enveloped our cities. With people removed, examples of efficiency suddenly look absurd. The most banal structures once easily ignored amidst the buzz of commerce now stand out, like looming architectural follies. Open office plans and packed elevators that once seemed like visions of a highly functional future now appear as allegories of our demise. 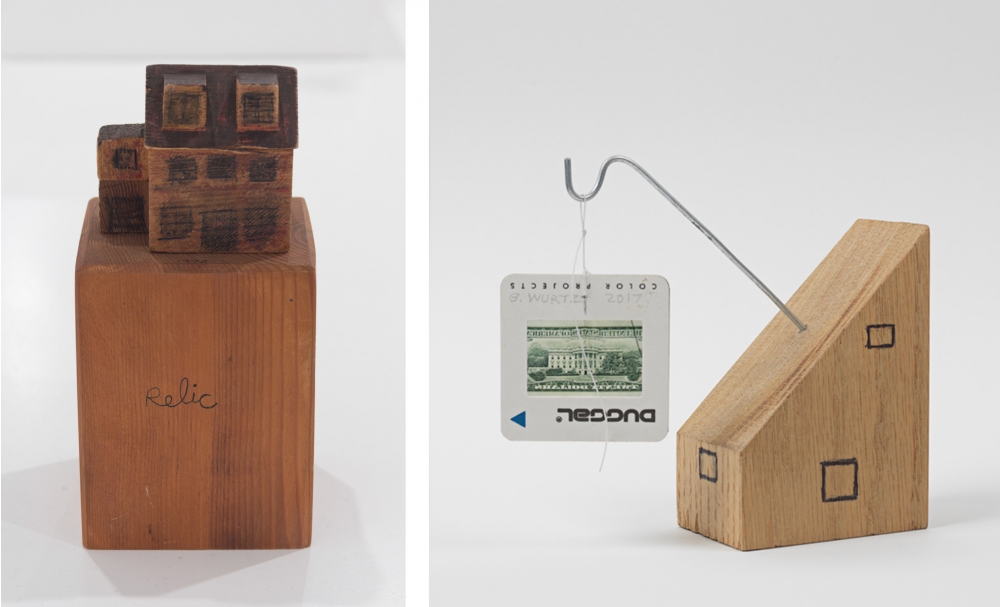 How will the vessels that contain our society adapt?

Andrew Cuomo recently claimed that "there is a density level in NYC that is destructive."

Many have already run to their cars, fleeing urban centers for remote get-aways. It is easy to imagine younger generations returning to the suburbs for a responsibly distanced future. 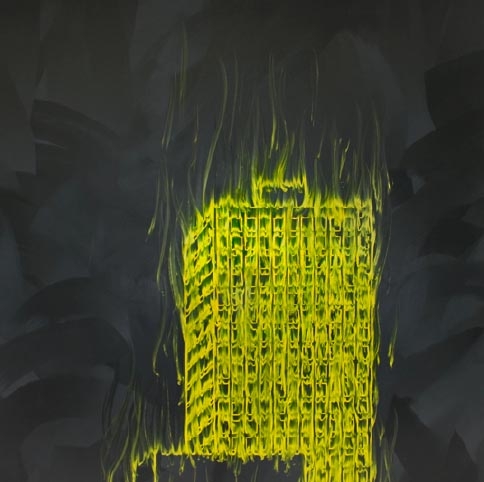 In the past we have burned cities to try and stop the spread of the plague, as with the fires in Honolulu’s Chinatown in 1900. We have a history of blaming the crowded urban slums for outbreaks. But if our response is to distance communities, what then of "the collective work of art we call the city," to borrow a phrase from architect and writer Michael Sorkin?

Even then, is it not class that dictates density? Perhaps a better critique is found within class structures than of the physical structures themselves. 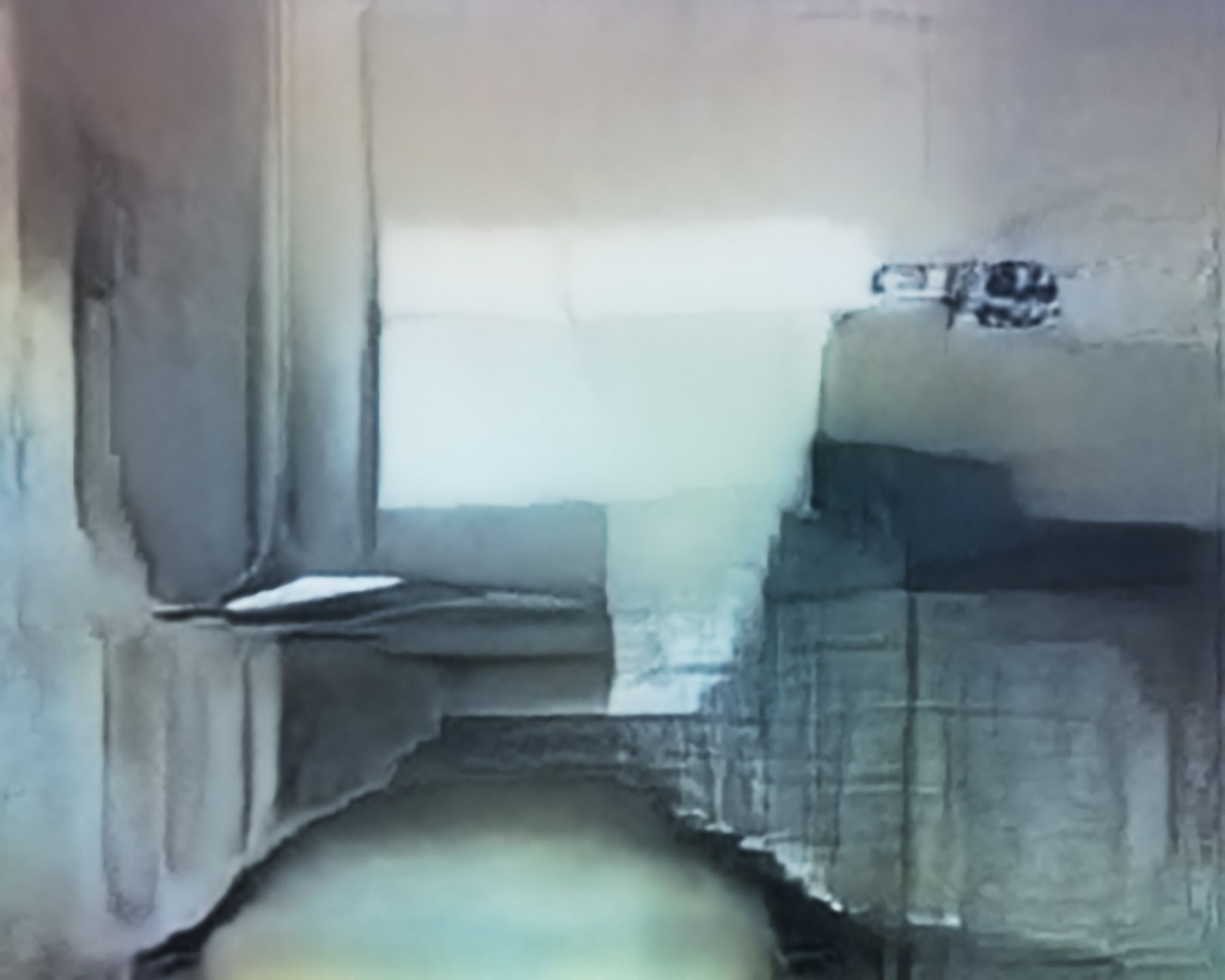 Will we retreat into our phones? Many cultural institutions are pouring resources into virtual reality platforms, seemingly succumbing to an inevitable artificial future. But then who controls our access? Who protects our privacy? 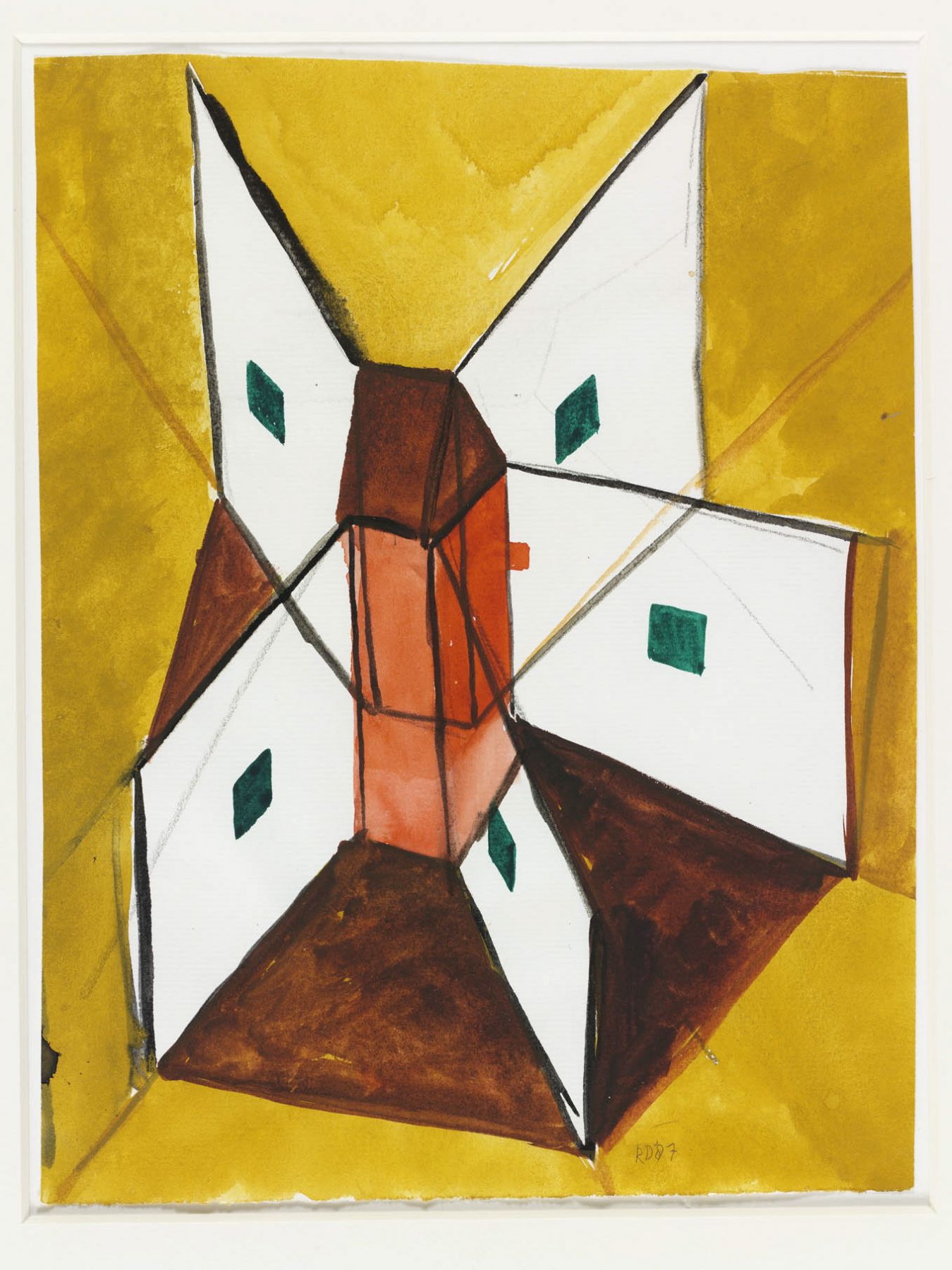 Cholera influenced the modern street grid, with its introduction of sewer systems and zoning laws. Tuberculosis brought about the sleek hygienic surfaces and solar remedies of modernism.

Things will change, our communities and its structures will adapt. Perhaps it is through the often prescient lens of art we can begin to predict how. 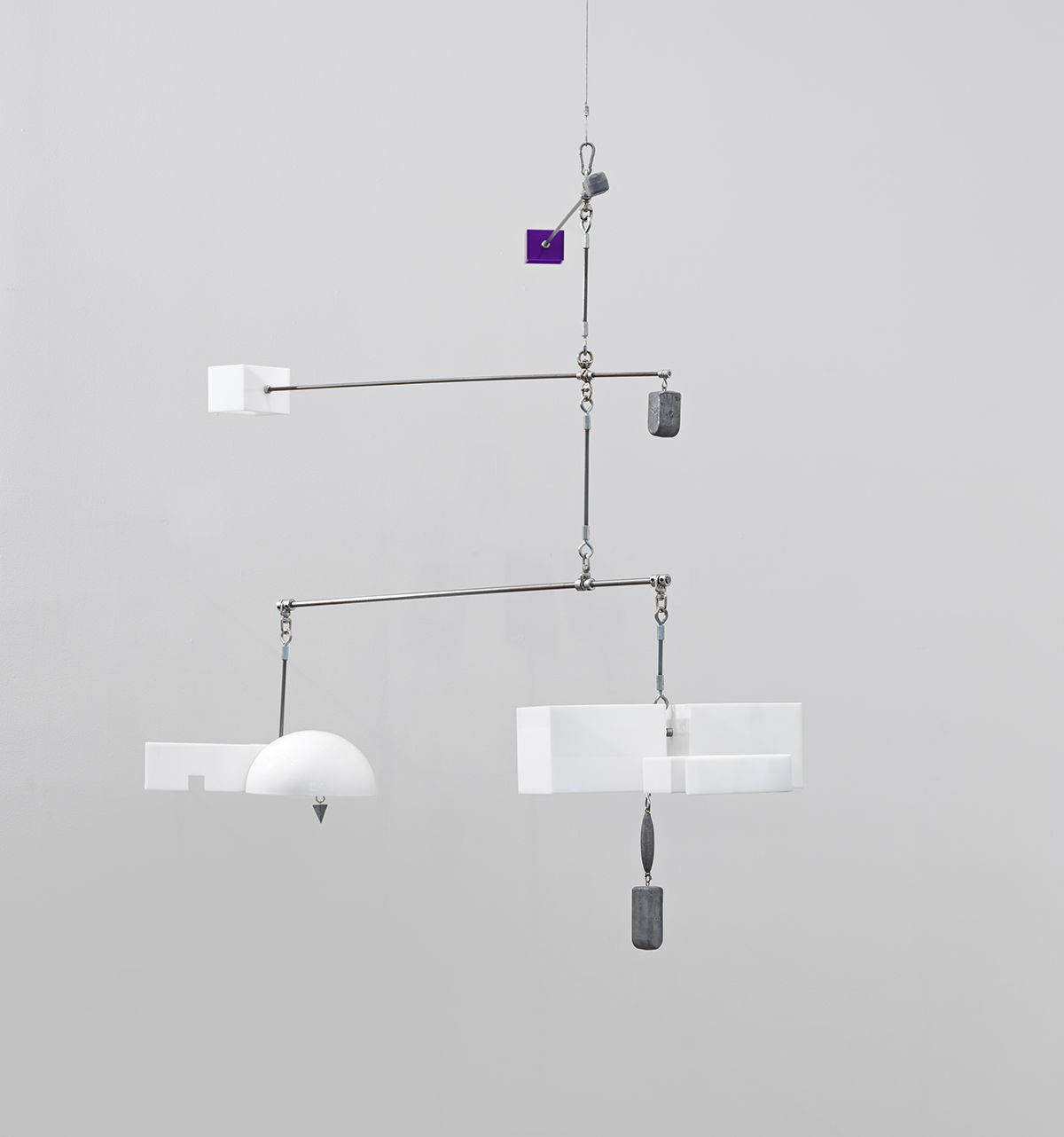 Mike Kelley has often mined the architectural ghosts of traumatic moments, as in this sculpture and drawing diptych from his 2002 series “Repressed Spacial Relationships Rendered as Fluid.” Building on his fascination with “repressed memory syndrome,” Kelley has created mobiles that investigate the blank rooms and buildings that were previously unresolved in his seminal work “Educational Complex.”

In that earlier work he recreated his personal history with architectural models of his schools (and childhood home), the vessels of his development. He left locations that were associated with repressed memories as unrendered blocks. Here those blank areas have become fragments of architecture, floating in space, struggling to accurately contain their own history. Without these memories accounted for, how should an accurate model of the past be made? 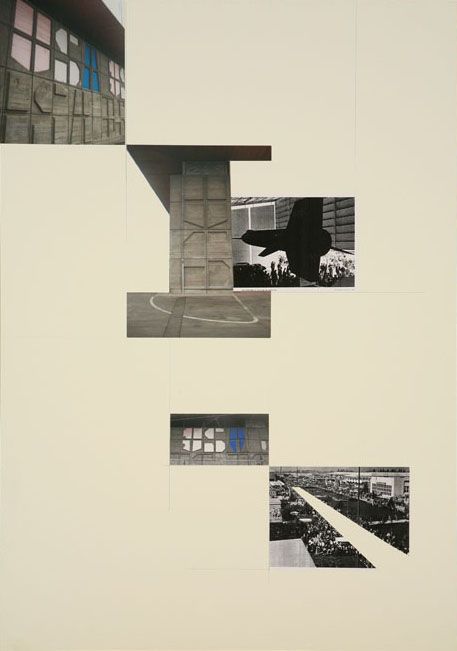 David Maljkovic’s works from the “Lost Pavilions” series collage together photographs of the buildings from the Zagreb Fairs during Tito’s reign in Yugoslavia. Once seen as proud monuments of an ideal communist society, they are now crumbling markers of its unrealized potential.

Maljkovic’s images deconstruct and scatter these structures suggesting both their incomplete missions and their fleeting symbolism. His collages have rendered the buildings as unrecognizable empty forms, but suggest that there are fragments of their history that remain relevant. 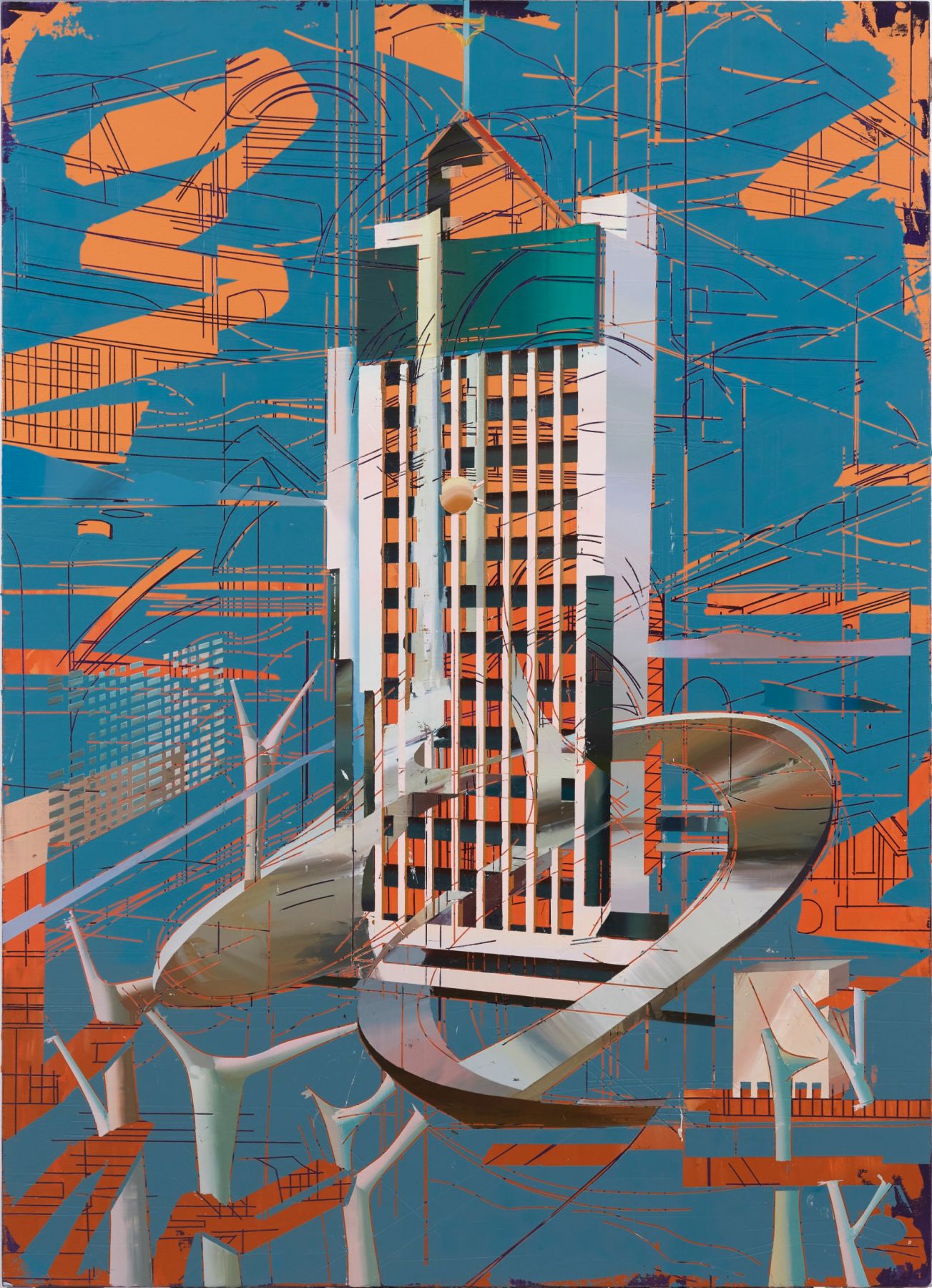 Above, Martin Kippenberger’s painting of the Betty Ford Center in California is from a group of works made in 1985. At the time he paired this rehabilitation clinic with the German supermax prison Stammheim and a Jewish elementary school, linking the three by their shared architectural detail of slit windows. The series suggests a flaw in the way architecture and society have responded to disparate needs for containment with standardized forms.

Cui Jie’s paintings are heavily influenced by the architectural landscape around her in China. As she witnessed the dizzying speed that the Chinese cities of Shanghai, Beijing and Hangzhou urbanized around her she also noticed how the buildings relied heavily on appropriated styles, particularly Japanese Metabolism. The buildings she highlights likely attain their style out of a need for hasty production, but in her paintings, such as “Kunming Long-distance Telecom Hub Building,” they are reimagined back within the social and environmental idealism of their influences. 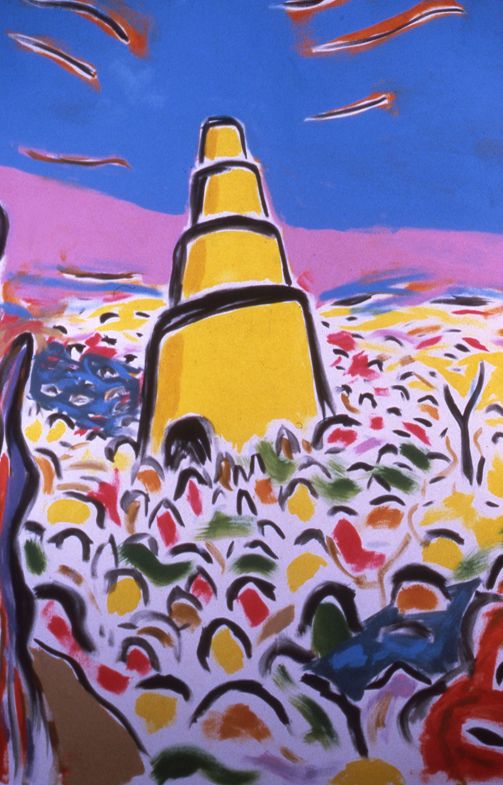 Both John Miller’s painting and Trevor Paglen’s photograph (below) share the Tower of Babel as their subject. Paglen’s photograph from his Last Pictures series has taken a detail of Breugel’s iconic painting of the tower and removed all of the figures. Miller’s painting is from a series he made in 1984 that depicted images with such conventionality that the viewer felt subconsciously close to the content.

Breugel’s painting has become the predominant historical record of the tower, and it depicts the moment before this seemingly utopic monument’s demise. By recreating Babel as a ghost town Paglen’s image amplifies the allegorical folly, in a way correcting the record.

In contrast, Miller has used our familiarity with the structure to suggest it as a gleaming success and perhaps highlight our willingness to see it as such, completely forgetting the facts in exchange for a delusional optimism.

As we shelter in place, looking uneasily towards the days, months, and years ahead, perhaps these renderings of history and visions of the future can give us a foundation from which we can build our response. 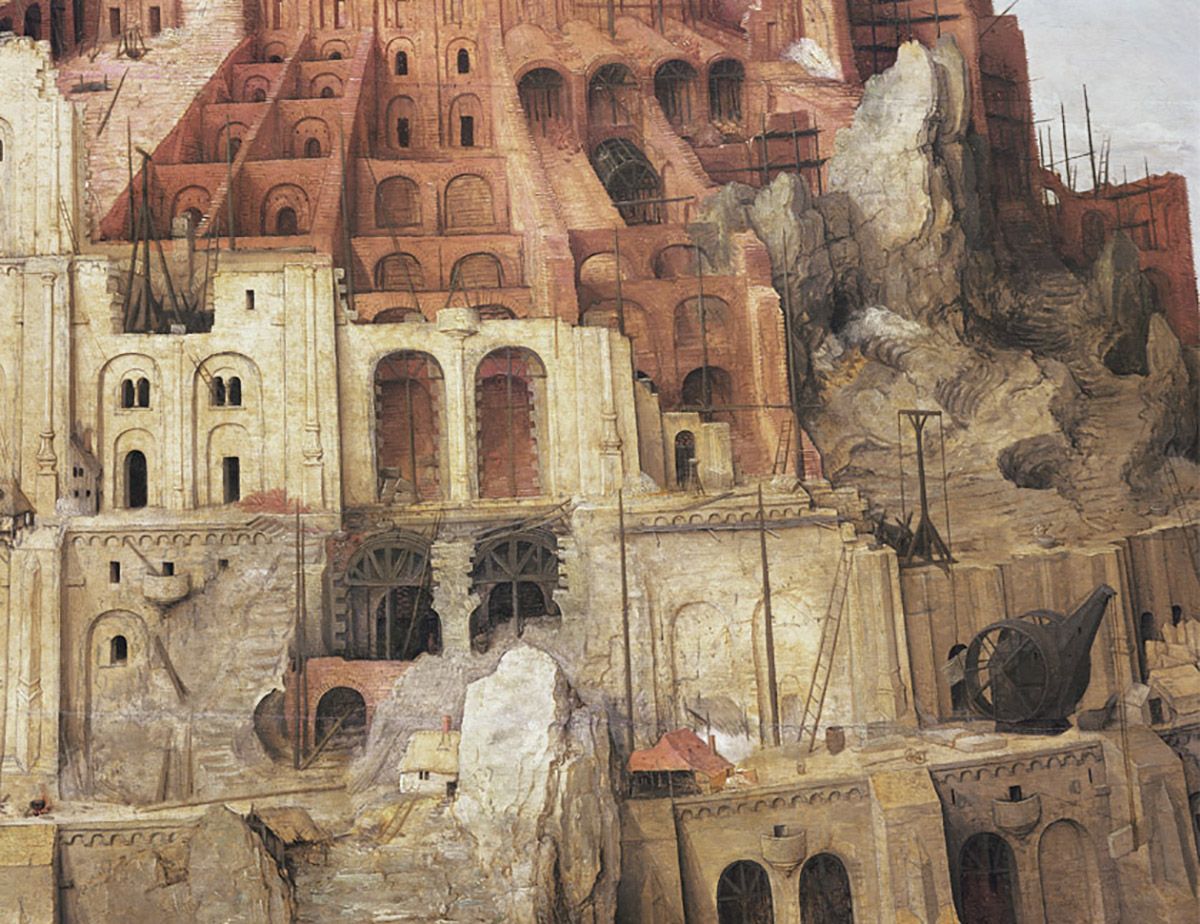 Virtual Tour of the Online Exhibition